Orangatang Wheels have been designed and created by the #1 longboard brand in the world.

After years of testing, research and mishaps, Loaded longboards sat down and created the Orangatang Wheels range back in 2008.

Quickly after, Orangatangs became known throughout the longboarding industry for their versatile urethane. Fast, grippy and some said, more pumpable than the Govenator of California!

Initially, there were two wheels with one duro/hardness – 80a Orange. Following from the popularity of this, came the addition of a second duro – 83a Purple. In 2010, Orangatang Wheels expanded their range further with the introduction of their third duro – 86a Yellow.

The longest standing wheels in the range are the Durian, Stimulus and Fat Free wheels. This goes to show that a good wheel never goes out of style! Over the years, the range has expanded to include 10 different models, complete with different duros.

Orangatang wheels have dominated the downhill market worldwide and have performed consistently for their purpose. Sliding and freeriding styles have also developed with thanks to the Orangatang range.

At our distribution facility, J & R Sports have the capabilities to build longboards to order. All Orangatang Wheels can be added to any board on the custom build longboards that we make to order. To find out more about this custom board building option, please click here. 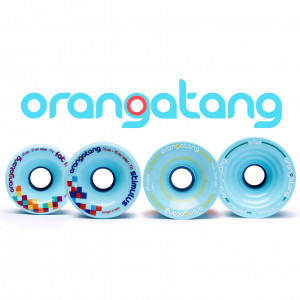 The Caguama Wheels are the biggest wheels that Orangatang have ever produced, coming in at 85mm! Perfect for those high-speed, longboarding thrills that you’re looking for. 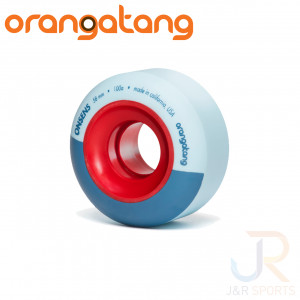 Not only do Orangatang produce wheels for downhill and freeriding, they also have wheels for use in a skatepark environment. 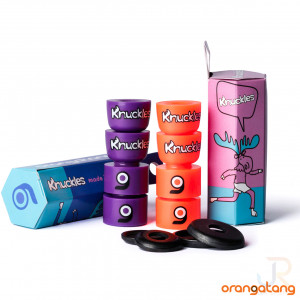 Orangatang decide to use their tried and tested urethane formula to produce a range of skateboard/longboard cushions.